Treatment of rubies, sapphires and emeralds

Accueil > Our coloured gemstones > Buying a ruby, sapphire or emerald > Treatment of rubies, sapphires and emeralds

List of treatments for coloured gemstones and semi-precious stones

Unfortunately, nowadays most coloured gemstones are treated. This is because gemstones that have a beautiful colour whilst being free of inclusions are now almost impossible to find. For this reason, suppliers resort to different treatments, some of which are not accepted. The most common are :

HEATING : Also known as Bata Kumbala, this technique consists in heating the gemstone in order to improve the colour or the clarity.

HEATING with ADDITIVES : The English name is Deep Diffusion Treatment.
This technique consists in diffusing additives, such as beryllium, deep in the stone. The goal here is to obtain colours that are totally different from the original and generally rare in a natural state, such as the orange colour of some sapphires.

Both of these treatments are accepted by the market, but will be specified on the certificate when the stone is examined by a laboratory. 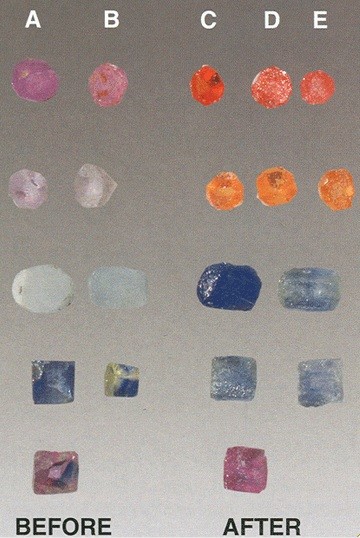 On the contrary, the treatments outlined below are considered as a fraud by traders. However, some unscrupulous suppliers have no qualms about using them. Particular attention is, therefore, necessary when buying stones of a certain size.

IRRADIATION : As the name suggests, some stones are irradiated. The sole reason for this is to improve the colour of the gem. This technique, besides having a limited effect over time, presents a clear health risk.

FILLING : Certain gemstones have cracks that are filled with various substances such as coloured oil, resin or high-density glass. Not only does this technique hide the fragility of the stone in question, but more importantly it enhances the colour in a totally artificial way.

SYNTHETIC : Gems with no inclusions are in most cases synthetic stones.
In their natural state, most gems, and more particularly gemstones such as rubies, sapphires and especially emeralds have inclusions.
Such pure gems are extremely rare. This is an important consideration when you invest in a stone.
Do not hesitate to ask for a certificate. It is a guarantee of security.

IMITATIONS : Numerous stones are used to imitate those with a much higher value. This is the case, for example, of spinel that some vendors pass off as rubies.
Another common fraud consists in making doublets or triplets which are an assembly of a natural stone with either a synthetic one or an imitation.

OUR ADVICE : Always ask for a certificate from an independent laboratory when you decide to invest in a gemstone.
In this way you will be sure of the quality: you will be informed of its origin and of any possible treatment it may have been subject to.

Here, you will find only quality gems of which the best specimens are systematically certified.

Many gems seem to play with the light when viewed under a direct light source. These phenomena are due to the presence of different inclusions that cause interference when the light hits the stone. These generally have a cabochon cut, so as to emphasise such effects.