The Tiffany diamond : Centrepiece of the Bird On the Rock broach 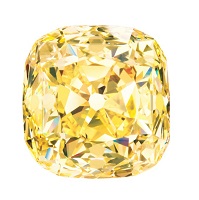 As its name suggests, this diamond belongs to the New York’s Tiffany & Co. jewellery.

It was discovered in 1877 in the Kimberley mine in South Africa. It was then presented to Gideon Reed, Director of Tiffany’s in Paris, who bought it for $18,000. It took a year of study under the supervision of the gemmologist Frederic Kunz before the decision was made to cut the diamond which then weighed 287.42 carats.

The result was a superb cushion diamond with 90 facets, an intense yellow colour, and a weight of 128.51 carats. It is set on the “Bird on the Rock” broach.

Over the course of its history, it has been displayed in many exhibitions around the world, but it can be seen most frequently in the jeweller’s shop on Fifth Avenue.