The price of gold is subject to both upward and downward fluctuations. The cause of such variations is essentially linked to the economy. Global economic conditions or the value of the dollar have a direct impact on the value of gold. In this way, it lost a third of its value in 2013.

The price of diamonds, on the other hand, fluctuates much less than gold. Let’s consider the case of a round, five-carat diamond, D colour, IF clarity, whose price increased by 144% between 2004 and 2015. Nonetheless, in a fairly difficult context, 2014 and 2015 were years where the value decreased (7% per year), but this was a far cry from the 30% drop in the value of gold in 2013.
In comparison to gold, diamonds are a more stable, regular investment as their value is influenced less by variations.

How are gold and diamond prices set ?

The London Gold Fixing is a world reference for gold prices. Gold prices are determined following a ritual that is unchanged since 1919. Twice a day (at 10:30am and 3pm), 4 banks, Société Générale, Bank of Nova Scotia, HSBC and Barclays liaise by telephone to fix the reference value of gold. From a starting price, they make offers of purchase and sale until an equilibrium price is found.

The offer is driven mainly by the production and sales of monetary authorities. Since demonetisation, some central banks and international institutions like the IMF have sold off part of their stocks, now holding only 30,000 tonnes in reserve. This nonetheless represents almost 20% of all gold extracted over two thousand years. Current production is estimated at 2,300 tonnes a year. It is in constant progression due to new extraction technologies.

Demand comes mainly from the jewellery and goldsmith sectors. Alone, they take up almost 80% of world supply. However, it should be noted that these professions rarely use pure 24 karats gold. For reasons linked to metal work, they mix it with copper (to make red gold), copper and silver (pink gold), silver (green gold), iron (grey gold), nickel (white gold) or aluminium (purple gold). Consequently, manufacturing of 9 and 14 karats alloys, rather than the traditional 18 karats, has reduced the price of gold jewellery, increased demand and consequently stimulated production, which has doubled in less than 20 years.

Industry also consumes increasing amounts of gold. It currently takes up 10% of supply. Gold is highly resistant to corrosion and has high electrical conductivity both of which are sought after in the computing, advanced technology and construction industries.

Diamond prices are set by the “Rapaport” index in New York that establishes a weekly average of prices listed in the Diamond Bourses and determines the price of diamonds in dollars.

At the beginning of 2016, prices were on the increase again. Rough diamonds were negotiated 10 to 15% more than they were in December 2015 and Rapaport increased the price of cut diamonds (round between 0.3 and 0.69 carats) on 15th January 2016. Despite a good start, the demand for diamonds over the year 2016 was insufficient and the impact of terrorism in the world and particularly in Europe was decisive. Thus, on December 30, 2016, a decline of approximately 3 to 4% of the price of the Rapaport took place and closed a year 2016 which was not good for the diamond. However, the trend seems to be reversing in early 2017. The price of raw diamond is rising again. Diamond stocks have been cleaned up and the jewelers have realized that in order to increase their sales, they needed a larger stock. Therefore, comparing the months of January 2016 and 2017, the first 15 days of January 2017 exceeded the total turnover of January 2016.

Also, the growing lack of confidence towards financial institutions shows a real enthusiasm for the investment diamond. Indeed, the repetitive appearance of new laws during the year 2016 has gradually led investors to turn to the diamond to secure their savings. Despite the fact that diamond prices may have better years than others, it is nevertheless one of the safest financial investments. Indeed, diamond being a scarce financial product, due to the absence of discovery of new mines, and the depletion of current mines, this one gains in value over the years. Moreover, diamonds of exceptions, sold at auction never cease to reach record prices.

If you are considering investing in diamonds, do not hesitate to contact us, we are happy to meet you in our Paris or Antwerp Office to discuss your investment plans. 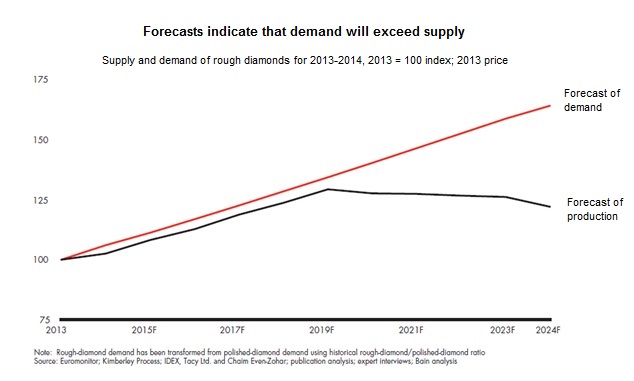