Diamonds are brought to us from the mantle where they are formed by volcanic eruptions. During the journey, the diamond is protected by a very hard rock called Kimberlite. Although they do not have the same origin, these two minerals are intimately linked, and the presence of kimberlite is the best indicator of a potential diamond deposit.

Diamond deposits can be divided into two categories : primary and secondary deposits.

Primary deposits are volcanic craters that have caved in on themselves and contain vertical kimberlite “pipes” that shrink until they crack (1). These can also occur as long, narrow veins, both vertical and oblique that spread over several kilometres. These are called “dykes” (2). However, many pipes and dykes are sterile and only 1 in 200 is economically viable.

Over time, and as a result of weather conditions, ancient volcanoes may also be eroded (3). Diamonds are then transported, over greater or lesser distances depending on the weight of the stones, to finally settle as alluvial deposits (4) even in river mouths or the sea (5). These are known as secondary deposits. 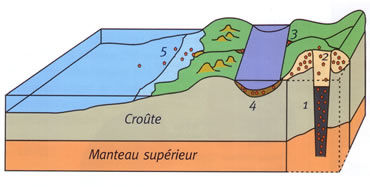