The Hope Diamond : The cursed diamond 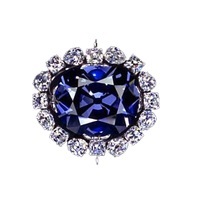 The Hope is a blue diamond weighing 44.52 carats and is from the Kollur deposit in India. It is believed that misfortune weighs on the owner of the Hope. This reputation is due to the fact that several of its owners have had tragic deaths. Its history is closely linked to the malediction of the three Ds that are transferred when such diamonds are auctioned : Death, Debt, Divorce. The Hope Diamond is said to be the cause of two of the three Ds : death and debt.

The diamond was brought to France by the merchant Jean-Baptiste Tavernier, who bought it in 1668 and sold it to Louis XIV, who had it cut by Piteau. The rough diamond that weighed 112.5 carats was reduced to 67.5 carats. It was given the name « French Blue ».

During the revolution, the diamond was stolen when the national wardrobe was burgled in September 1792. The thieves left France for England in order to re-cut the stone so that it would be easier to sell. It then disappeared until 1812. In 1830, the stone was sold to Henri Philip Hope, a London banker, who gave it its name. The diamond remained the property of the Hope family for many years. It is said that all those who inherited the stone had tragic deaths.

Later, after being the property of Pierre Cartier, son of the famous jeweller, then of the billionaire Ed. B. MacLean, it was finally Harry Winston who acquired it in 1947. A dozen or so years later, he gave the diamond to the Smithsonian Institute in Washington, where it can still be admired today.