The Daria-i-Noor : Jewel of the Iranian crown 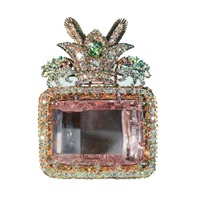 The Daria-i-Noor (“sea of light” in Persian) weighs 182 carats. The diamond is unique due to its pale pink colour. It is currently part of the Iranian crown jewels.

It was extracted from the Golconde mine in India and was owned by the Mogul emperors until 1739. In that year, Shah Nadir invaded India and took possession of the Mogul treasure, which included, among others, the Daria-i-Noor and the Koh-I-Noor. The treasure was then taken to Persia where the diamond has been ever since, passing from one dynasty to another.

According to a team of Canadian researchers who carried out research on the crown jewels in 1965, the diamond could only have been part of a much larger pink diamond mounted on the Mogul emperor Shah Jahan’s throne, that the French jeweller Tavernier described in his diary in 1642.

It would seem that this diamond was cut into two : the largest part became the Daria-i-Noor and the remaining part weighing 60 carats became the Noor-ol-Ein. The latter is currently mounted in a tiara that is part of the Iranian Crown Jewels.