Mysteries of the Black Orlov 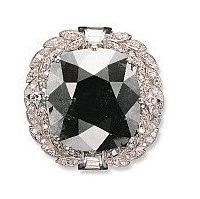 The history of the Black Orlov diamond is shrouded in mystery and superstition. In the nineteenth century, it was apparently part of a 195 carat rough stone, which was used as an eye for the statue of Brahma, in an Indian temple, near Pondicherry. It is also known as : the Eye of Brahma Diamond. Legend has it that it was stolen by a monk and was the origin of three mysterious suicides. Considered to be cursed, it was broken into three to break the scourge. Today, the very dark, black, cushion cut diamond weighs 67.50 carats.